Chapman College on board ss Ryndam 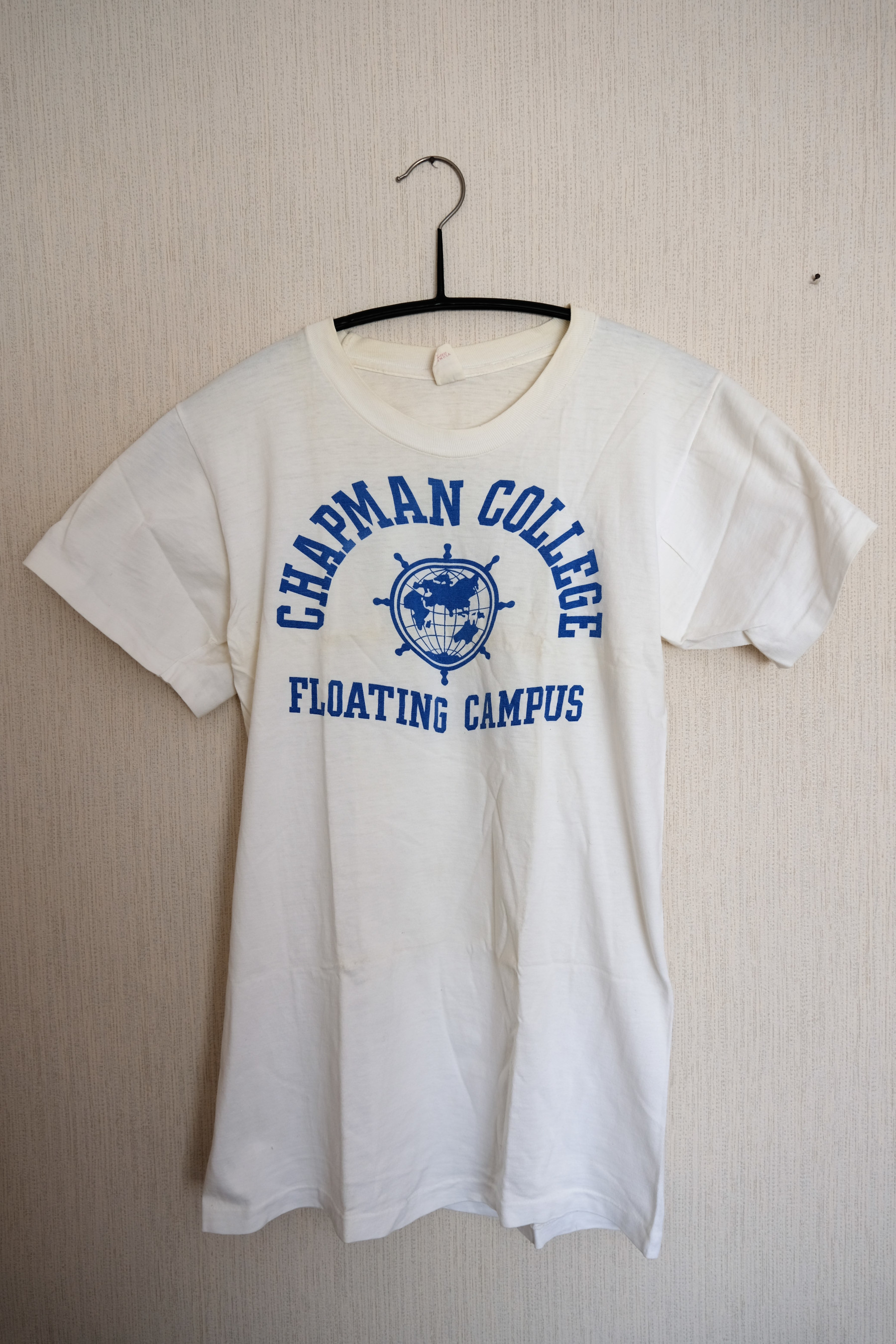 The story of the Chapman College T-shirt and ss Ryndam

The English version is also below the Dutch Version: Chapman College on board ss Ryndam

CHAPMAN COLLEGE ON BOARD SS RYNDAM

In the HALLO-magazine, the magazine of Vereniging de Lijn an announcement was made that in one of the following editions attention would be paid to Chapman College. Of course memories came up again. My father, Anton Lohmann, had gone through all ranks on both the Maasdam and the Ryndam from 1953 and had since risen to second Engineer. The Holland America Line had designated the Ryndam as the successor to the Seven Seas of the Europe Canada Line which was handed over at the beginning of 1966. The Ryndam became a floating campus for Chapman College in Orange, California. The German officers and certainly those of the engine department got along poorly with the ship. Experienced forces had to come from the Holland America Line to assist and get the Germans on their way. So my father was appointed for that. Every time he had to go to the Ryndam again to make sure they could continue sailing. During that period I was also regularly on board when the ship was moored at Wilton Fijenoord in Schiedam, where the ship was also built in 1951. Even had lunch on board. We were not used to red cabbage with roast duck on Sundays.

By the way, the Germans had a ranking system that was different from that of the Holland-America line and the rest of the Dutch Merchant Navy at the time. We had a Chief Engineer and one or several 2nd Engineers on the passenger ships, the Germans had a Chief Engineer (Haupt Technische Offiziere, leiter der Machineanlage) and then the 1st engineer, etc. It looks a bit like the rank system on the current HAL fleet. The ship continued to sail for the Germans until there were so many problems that the ship came back under the Dutch Flag. The Germans came in a situation that there was no water in the boilers. When my father was on board, he got a T-shirt from Chapman College. And of course this was for me. In the Netherlands nobody wore T-shirts yet, but in the summer I wore this Chapman College T-shirt bravely. You wear your undershirt, they said. But there were ladies who had a different view. They would like to buy the T-shirt from me because it could function well as a mini skirt. As you can see in the picture I was able to withstand that and still own it

Another nice anecdote from the ship's German period. The Germans smoked HB and Ernte cigarettes, so there was a nice supply of them on board. However, back under the Dutch flag with a Dutch crew and with the American students of the Chapman College, those German cigarettes turned out to be unsaleable. The Chief Steward just had a problem to get rid of it. He was willing to sell them to my father for a bargain. We smuggled the cigarettes to get them home when we got the chance. But it turned out as a disaster. In the meantime, the cigarettes had dried out to such an extent that they could not be smoked properly. We called them straws. If you had one on, you would be coughing for 15 minutes. We were very generous with giving these cigarettes away at the time, but never dared to offer anyone such a cigarette a second time. It was the time when smoking was still healthy, or so we thought. Fortunately, we now think differently about that.

The magazine of "Vereniging de Lijn" 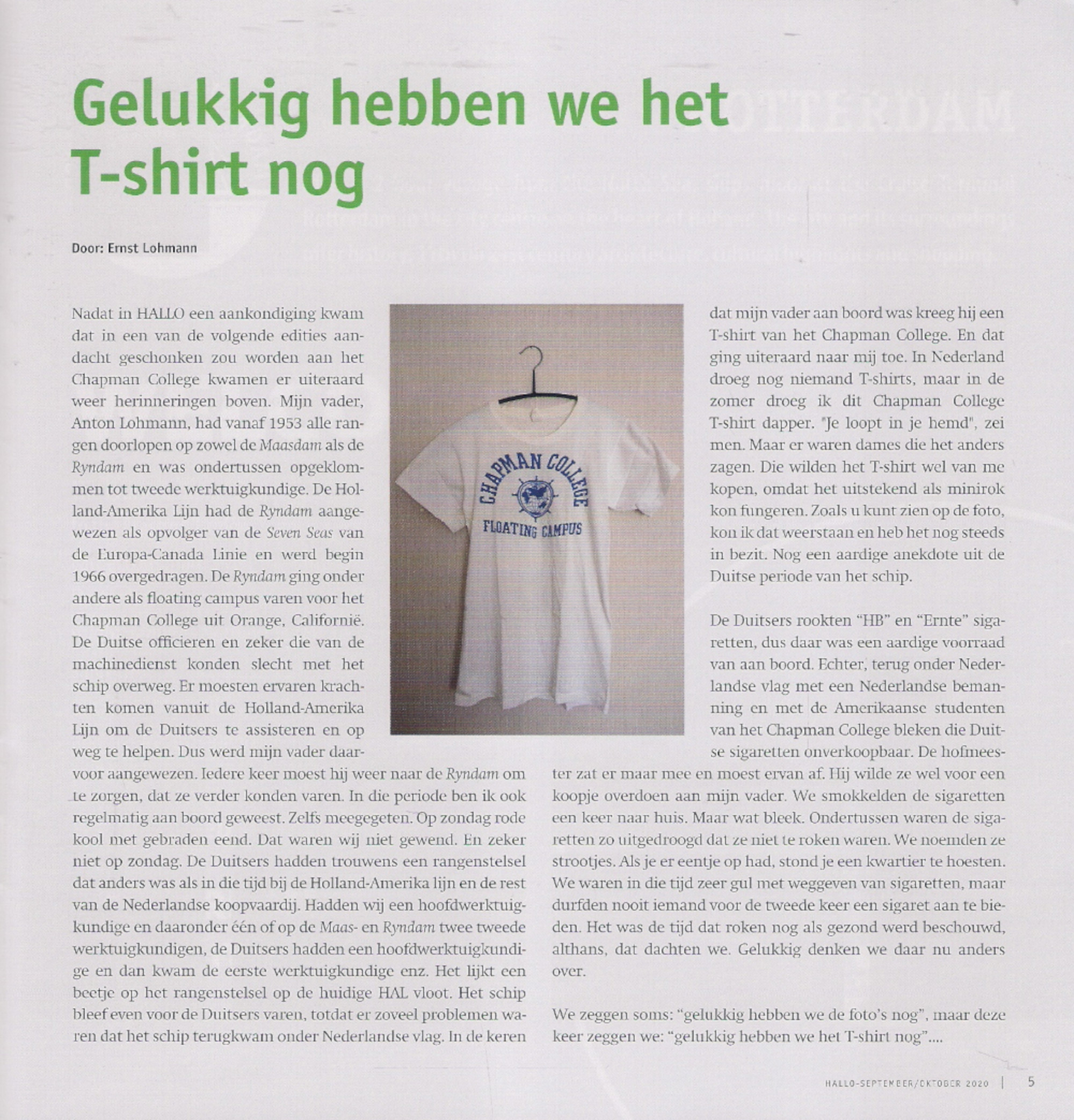